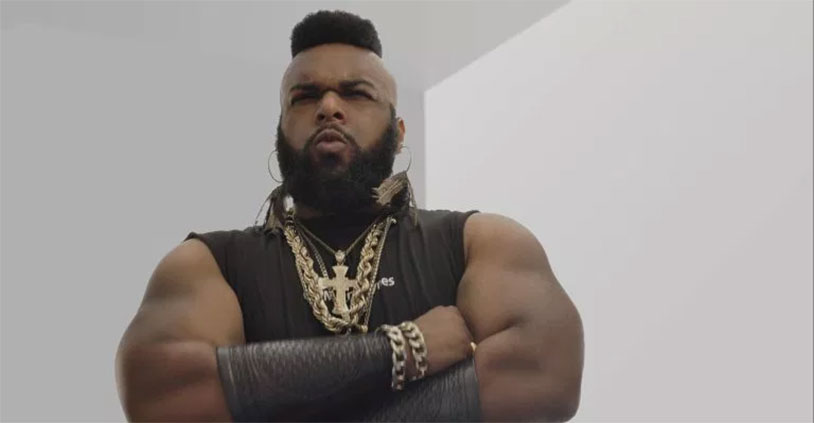 The life of a celebrity impersonator can be a tough one, but this Mr. T lookalike has recently found a new wrinkle in his act: after the mohawked former A-Team star got a gig doing commercials for Snickers candy, it put him in a life or death situation. I pity the fool who doesn’t read on.

Our man’s name is John Lashley, and he’s been a Mr. T impersonator for over a decade. It all started completely by chance, when he attended a friend’s costume party as the actor who played Clubber Lang in Rocky. The resemblance was spot-on, and he was quickly signed to do a number of British commercials. His fame grew from there, and it wasn’t long before he went full-time. And he’s certainly had some interesting gigs. From the interview:

“However, the one that stays with me most is when I was booked to spend time with a terminally ill disabled person with dementia, on what would have been their last birthday.

That day still has such a huge impact with me. I was booked because the patient’s most vivid memory was when they met the real Mr. T in the 80s, when he came over to the UK, and she believed he was her husband.

I found it so unfair that her memories were being stolen from her, and it was an honour to be there on such a significant occasion.”

But here’s the downside: Snickers. Lashley is horribly allergic to peanuts, but people often want to see Mr. T chowing down on the iconic candy bar. So he has a routine:

“A lot of people now associate Mr. T with Snickers, and so I’ve had to bite into my fair share of bars, which is actually pretty scary because I am deadly allergic nuts. It means I do one take for the video clip, biting into the Snickers, then run to the sink to wash out my mouth.”