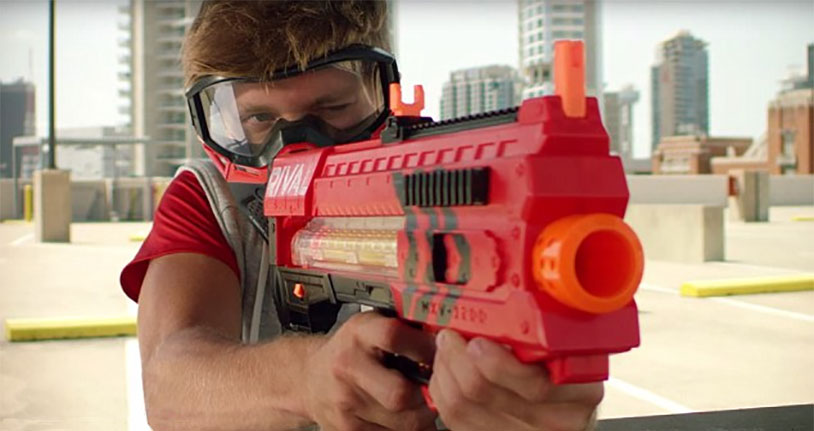 The evolution of Nerf guns is a fascinating story. Parker Brothers originally invented the polyurethane foam that they call Nerf in 1969 for indoor sports – they wanted a material that was less likely to cause damage to your valuable home furnishings. The product line diversified over the years into many different types of balls, but 1989 would see the innovation that changed Nerf forever: the Blast A Ball, a little pink cannon that shot golf ball-sized Nerf spheres across the room.

The Blast A Ball begat a whole lineage of Nerf guns that have evolved and changed over the years. The traditional spring-loaded mechanism has been joined by many other ways to fling the foam, most notably battery-powered firing. Nerf guns have gotten bigger, more powerful, and cooler looking.

Meet the MXV-1200 Blaster. The geniuses at Nerf have been working on this puppy for a staggering five years, and it shows. This is by far the most potent Nerf gun ever created, able to blast a load of balls at speeds of nearly 70 miles per hour. The special ammunition that the MXV-1200 uses is modeled after a gold ball, with a dimpled surface to give it a straighter flying arc. You can even load it quickly by pushing the 12-round magazine down on top of loose ammo.

The MXV-1200 requires a potent power source of six C batteries to run, and it’s the largest blaster the company has ever released. Needless to say, Nerf aficionados are salivating at the promise of taking this puppy out for a test run. Executives at Hasbro have said that they spent almost five years taking surveys and talking to Nerf fans about what they wanted most in the next generation of blasters, with speed, power and accuracy the top goals. It certainly looks like they got their wish.

Here’s one of the first reviews of this ball-spitting fun machine, from a lucky enthusiast who got their hands on it early.