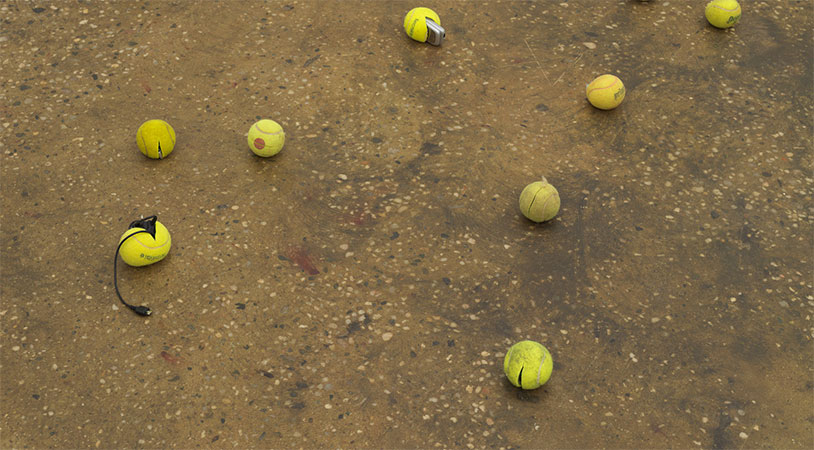 We don’t know art, but we know what we like. And we like art collective Claire Fontaine’s untitled tennis ball sculpture, currently on display at Century Pictures in Bushwick, Brooklyn. The French collective is noted for their explicitly political work, and Untitled (Tennis Ball Sculpture), which they first debuted nearly a decade ago, is no exception.

The piece consistes of several dozen tennis balls cut open with a variety of items inserted in them, including cell phones, cash, candy and lighters. This obviously hearkens back to a popular method of smuggling contraband items into prison – people on the outside throw balls over the fence in the hopes that their chosen inmate will pick them up to make their stay in prison that much easier to bear.

The second part of the installation is a little harder to parse – a security camera is mounted in the top corner of the room, casting a baleful eye on the art patrons below. Is it on, recording, or just there to engender a feeling of paranoia? The artists aren’t talking. The open nature of the artwork combined with the feeling of being watched creates a complex emotional resonance that’s very worth experiencing if you’re in the neighborhood.

Untitled (Tennis Ball Sculpture) by Claire Fontaine is now on view at Century Pictures until July 27, 2018.