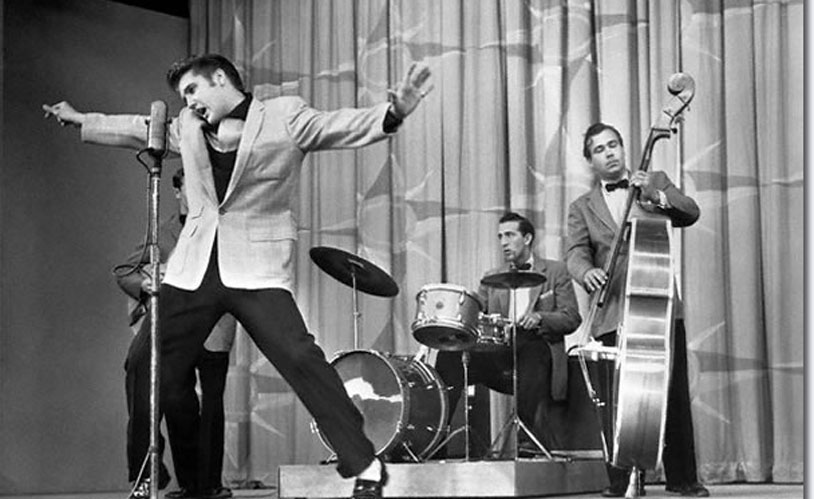 A daily feature here on The Ball Report is looking back through the hourglass of time to showcase an event that really took balls on this day. It’s June 5, and today’s story took place in 1956.

It’s hard to believe, but rock & roll music used to be a powerfully transgressive force. In the mid-50s, the rising of this new popular music had the older generation panicked – it was rhythmic, aggressive and sexual (at least for those days). At the forefront of this new vanguard was a young man named Elvis Presley.

Presley had been releasing records and touring at a frantic pace, but his hits had all come on the Country and Western charts. Early in 1956, he was signed to RCA/Victor and started his ascent to the top of the pop charts. The one moment that made Elvis a star came when he appeared on the Milton Berle show, performing “Hound Dog.”

The insane cacophony of teenage screaming that greets the King as he steps onto the stage should be your first warning that something is happening here. Presley had been on Berle’s show before, but this time was different. His past performances had been slow ballads or featured him playing the guitar, but this time he set his instrument aside and demonstrated the pelvic gyrations that would rock the nation.

The crowd went wild, but the critics were not impressed. NBC received thousands of letters in protest from scandalized parents. It was too late, though: the horse had left the barn, and the era of rock & roll was officially upon us, courtesy of Elvis’s big old balls.