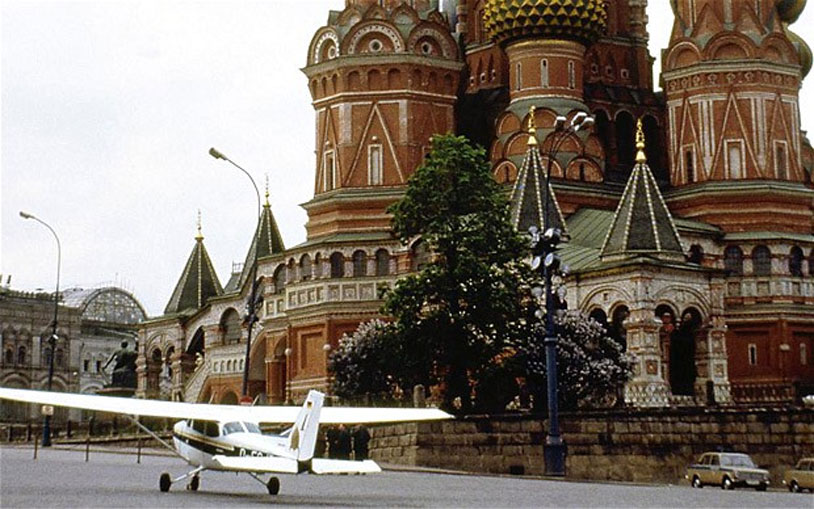 A daily feature here on The Ball Report is looking back through the hourglass of time to showcase an event that really took balls on this day. It’s May 28, and today’s story took place in 1987.

It’s hard to believe that, just a few short decades ago, Germany was split in half by the Iron Curtain, transformed into a Democratic West and a Communist East. Obviously history picked a winner when the Berlin Wall fell in 1989, but before then citizens on both sides were working hard towards a new peace. One of the most fascinating stories from that era is that of teenage aviator Mathias Rust, who took off from Finland the morning of May 28th ostensibly to land in Stockholm, Sweden.

After refueling in Helsinki, Rust’s real intentions became clear. He turned off the communications systems in his Cessna F172P that he’d modified by ripping out the back seats and replacing them with fuel tanks and made a beeline for Moscow.

It wasn’t long before he showed up on the Russians’ radar, and surface-to-air missiles were locked to his plane awaiting the order to launch. The Soviet government couldn’t ascertain if he was a threat, and they couldn’t hail him on the radio to find out, so it was a tense few hours before he finally made his landing.

In an act of utter ballsiness, Rust put his plane down on a bridge by St. Basil’s Cathedral in Red Square, in full view of Soviet citizens. Amazingly, a system of guide wires above the bridge that would have destroyed his plane had been coincidentally removed for maintenance that very day. He taxied his plane into Red Square, where he was greeted by onlookers and signed autographs until the Soviet police arrested him.

Rust would spend a year in prison for his stunt, but the repercussions were felt on a global scale. The Soviet military’s inability to stop him allowed Gorbachev to get rid of many of the hard-line opponents to his program of reform, leading the way to better relations with the West and eventually the fall of the Eastern Bloc.