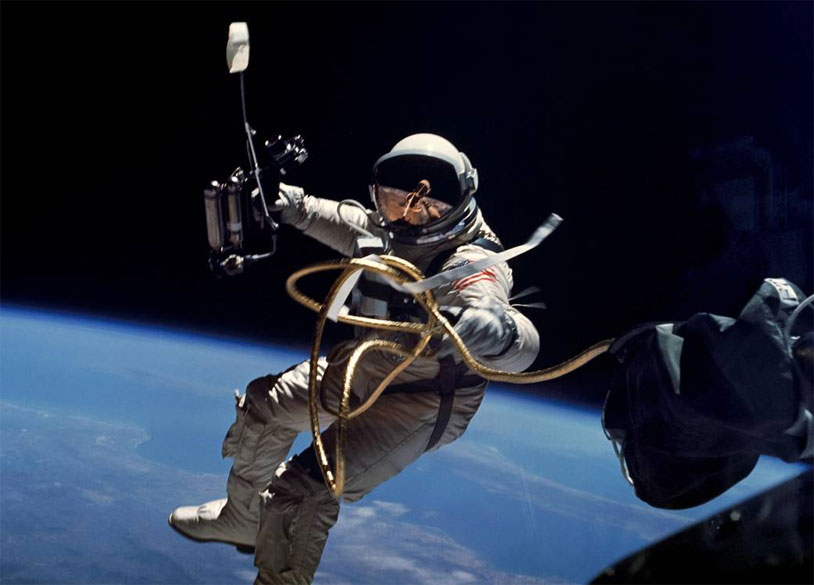 A daily feature here on The Ball Report is looking back through the hourglass of time to showcase an event that really took balls on this day. It’s June 3, and today’s story took place in 1965.

One of the most important fronts of the Cold War was the race for space, as the United States and the Russians frantically competed to one-up each other outside of Earth’s atmosphere. Getting human bodies in space, and eventually to the Moon, was the end goal, and the Commies beat us to it with Alexei Leonov’s walk in March of 1965.

The Gemini 4 mission was the first time an American citizen would venture out of his spacecraft in orbit to really come face to face with the vastness of space. Ed White opened the airlock and stepped out of the small craft with only a small hand-held gas gun to maneuver. He was tethered to the craft by a long cable, but his experience was totally new to him.

Video footage of White tumbling through space captivated audiences – his zero-gravity freedom promised a whole new universe of exploration. Although White had no defined mission objectives for his spacewalk, NASA learned a lot from it – his visor fogged up, which indicated that the spacesuit was having problems keeping cool, and the lack of handholds on the outside of the craft gave him trouble controlling his body.

But the real point of his extra-vehicular excursion was to show the world that it was possible: America was keeping pace in the space race, and we weren’t going to slow down for anything.

White described returning to the confines of Gemini 4 as “the saddest moment of his entire life.” He would die two years later when a fire broke out in the cabin of Apollo 1, killing all three astronauts aboard.