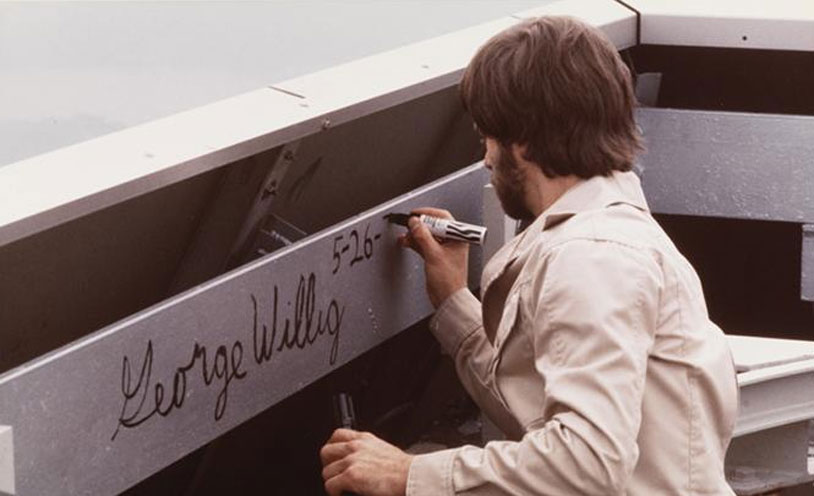 A daily feature here on The Ball Report is looking back through the hourglass of time to showcase an event that really took balls on this day. It’s May 26, and today’s story took place in 1977.

New York City has been hyper-sanitized to make it safe for tourists, but back in the 70s it was a much wilder place. There was an “anything can happen” attitude on the streets, giving birth to punk rock, experimental art and some very ballsy feats of daring. George Willig was a Queens-born mountain climber who worked in a toy factory. Unable to raise the scratch to travel the world and scale the great peaks, Willig set his sights on something a little closer to home: the south tower of the World Trade Center.

Stretching 1,358 feet into the air, the shorter of the Twin Towers was still the third-largest building in the world, and scaling it unassisted was a fantastic feat. Willig scouted the building months earlier and took measurements of the track that window washers used to raise and lower the basket that held them against the glass surface. At work, he manufactured special clamps that he could use to lock in to the track. He then did a couple test runs under cover of darkness before starting his climb for real at 6:30 AM on the 26th.

When workers caught sight of him, they called the police in case he was planning a very elaborate suicide. Two cops went up in a gondola to try to talk him down, but once they realized he wasn’t planning on killing himself, decided to stay out of his way until he reached the top to not further endanger his life. Willig’s ascent took three and a half hours – once he reached the top, he signed his name on a piece of metal and then had to have help pulling his body through a small hatch. Police arrested him on the scene.

New York mayor Abe Beame fined him $1.10 – a penny for each floor of the building – and sent him on his way. Willig parlayed his feat into talk show appearances, a book deal, and even a second career as a stuntman.

Here are two news reports from that day.