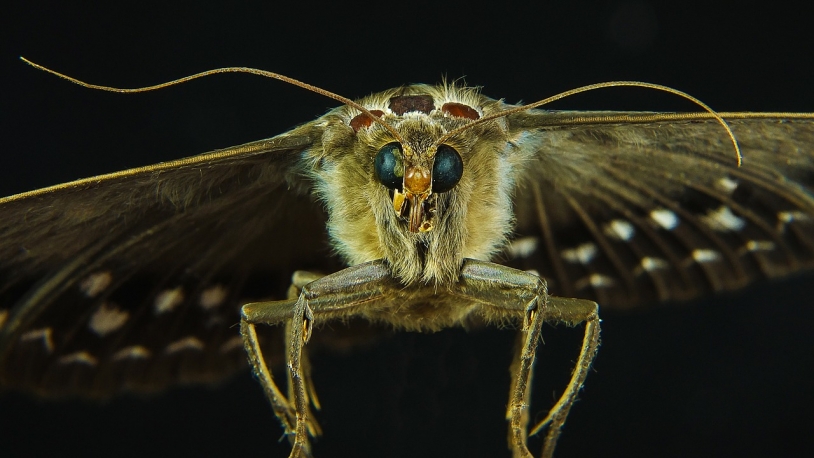 The fine folks over at Gizmodo have a fascinating breakdown of a paper from the Applied Physics Letters journal, without which we would be utterly lost in a sea of formulas and citations. The paper, entitled Hollow carbon spheres in microwaves: Bio inspired absorbing coating, is every bit as befuddling to the layman as it sounds; the general idea seems to be that researchers appear to have discovered a way to create an anti-reflective coating (i.e. a material that excels at absorption) based on the properties of moth eyeballs.

In other words, we have basically ripped off nature once again.

The applications for this technology, should it prove possible or profitable enough to scale and produce, are perhaps not totally obvious. It’s “Bio inspired”, you should remember, which means that while moth eyeballs have evolved to absorb a large amount of light for moving around in their typically dark environment, we humans will endeavor to adapt this mechanism for our own purposes.

For that reason, scientists from the Research Institut for Nuclear Problems of Belarusian State University and the Institut Jean Lamour-Université de Lorraine have focused on making this anti-reflective coating excel at absorbing microwaves. According to Wikipedia, “microwaves are used in spacecraft communication, and much of the world’s data, TV, and telephone communications” as well as the most likely application for this technology: radar. More specifically, defeating radar intended to detect aircraft.

And they’re doing all this with charred sugar beads. Apparently, because they can mimic the microscopic structure of moth eyeballs. From Gizmodo:

The size of the beads causes the effectiveness of the absorption to vary—with the ideal size being about 12 millimeters in diameter. These absorb microwaves the way moth’s eyes absorb visible light. The ability to absorb these wavelengths so completely may one day lead to coatings that allow planes to fly overhead without showing up on radar. Beyond that, it may even be used to manipulate microwaves instead of simply absorbing them—just by using charred sugar.

While that may not have a lot of application for the average person, it’s a heck of a lot more impressive than sweetening up your coffee, we’d have to admit.