We Need to Sack Up and Talk about Testicular Health 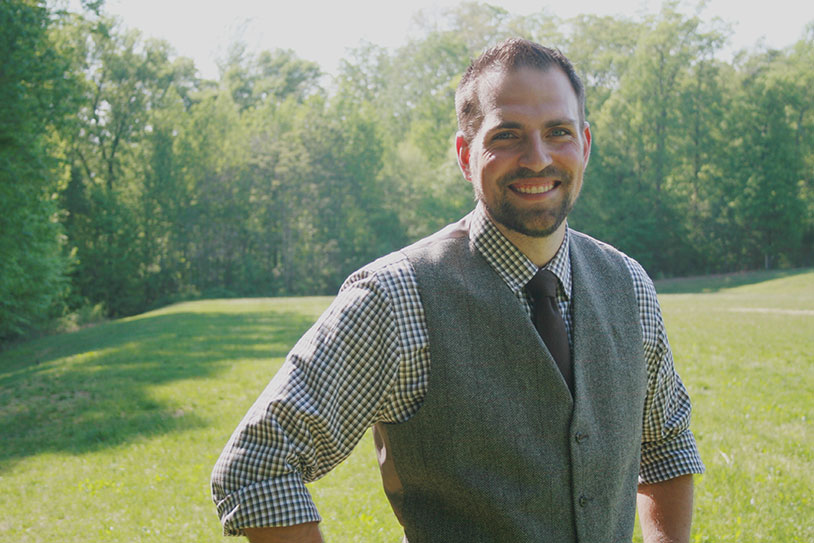 We’re happy to present this piece by Justin Birckbichler.

The weekend of October 28th, 2016 was the third college homecoming since I had graduated from Shippensburg University in 2013. I had big plans—tailgating at the football game, hitting up the old bars, and reminiscing and catching up with friends.

Life had other plans for me. Instead of having a ball, I spent that weekend losing one.

Earlier that month, I felt a lump on my testicle while doing a routine self-exam in the shower. In case you’re like the 42% of men who say they don’t know how to do a self exam, they’re pretty easy. Best done during or after a shower when the scrotum is relaxed, it’s a quick and effective way to catch testicular cancer early on. Just place your index and middle fingers under the testicle with your thumb on top. Firmly but gently, roll the testicle between your fingers. Any weird lumps or bumps should be checked out by a doctor. (More of a visual learner? Check out this video – I promise it’s safe for work.)

Even though I knew to do a self-exam monthly and, on that October day, I felt something amiss, I was initially hesitant to call the doctor. I hadn’t even been to the doctor for a routine check-up in the past three years, and now I had a problem that was decidedly abnormal. I wanted to brush it under the rug, but I had a sense that doing so would be foolish.

Unsurprisingly, I’m not the only man who feels this way. According to the Cleveland Clinic, only 40% of men will go to the doctor only once they feel the issue is serious. Men simply don’t discuss their health, and I was part of the problem.

Finally, after some nagging prodding from my then-fianceé, I called a general family doctor. Within two weeks, I was sitting in a urologist’s office. Despite my initial desire to ignore this issue, I somehow knew a bombshell was about to be dropped.

“So I am going to be straight with you. You have testicular cancer.”  Those were some of the first words out of his mouth

“Is this something I get a second opinion on?” I asked. Even though I was prepared for bad news, the direct nature and magnitude of his words made me lose my breath momentarily. I was only 25. No one that young seriously believes that can be diagnosed with cancer, especially in their balls.

“In most cases, I tell my patients to get a second opinion. In your case, we don’t have time,” he replied.

“So what’s next?” I inquired. For the time being, I had to accept this new diagnosis and move forward with next steps.

“Surgery. We need to remove the affected testicle immediately. We can probably get you in tomorrow.”

I was not expecting that. I thought could deal with cancer. Losing a ball? It seemed impossible.

Resigned to my fate, I began to grapple with the fact that I would be losing 50% of my testicles, which like most guys I considered a direct physical manifestation of my manhood.

As I prepared myself for surgery, I remembered that, instead of gathering up items to take to a hospital room with me, I should have been packing for homecoming at Shippensburg. It was a stark contrast from the planned carefree weekend of partying.

The surgery itself was easy and uneventful, but what came after was difficult: talking about it. So many of my college conversations with friends I should have been seeing that weekend revolved around the word “balls.” If you were taking charge of life, you were grabbing life by the balls. You chickened out? You have no balls. It’s ironic that guys casually mention balls all the time, but ignore their testicular health. I was beginning to realize that, while it’s socially acceptable for guys to joke about their balls, having serious conversations about testicular health has a serious stigma. This is a deadly mistake.

Initially, I hesitated in telling people that I was now more aerodynamic below the belt, because I didn’t want them to think I was less of a man. I knew that my own reaction to my surgery was an indicator of a larger societal issue: men don’t want to talk about anything that might make them seem less “manly.” I knew my story might help change this narrative.

During recovery from the surgery, I decided to start a testicular cancer awareness blog, entitled A Ballsy Sense of Tumor (I love a good pun). I decided to detail my entire journey, from discovery to eventual survivorship. I wanted to take the narrative that I was sharing with close friends to a larger audience, to help destroy this stigma. It’s an urgent need; literally a life and death mission.

As I began drafting posts, I came to the point in my story about the surgery. At first, I referred to the surgery as having a cancerous mass removed. I wasn’t sure if I wanted to out myself as having one testicle or keep that vague.

Upon further reflection, I realized that I was perpetuating a harmful narrative—hiding a health problem to maintain a sense of “being a man.”

So I decided to bare all (not literally) and share with the world that I was now the Amazing Uniballer, one of the lesser known Avengers.

I’m glad I did. I feel like I couldn’t be an advocate for men’s health and honest communication if I wasn’t being honest myself.

But this isn’t just my story—it’s all of ours. My story isn’t unique. How many men have gone through a medical crisis and stayed silent about it? How many men don’t speak up when something isn’t right with their body simply because they think a real man would just grin and bear it?

We’re hurting ourselves and our fellow men by keeping our health experiences to ourselves. Not talking about it can be a potentially life-threatening mistake. We need to live in a world where we can freely talk about testicular self-exams and other men’s health issues without it seeming like a threat to our manhood (it’s not—it’ll literally save our manhood). I want all health-related conversations to be without stigma, but I’m especially passionate about men’s health.

A year later, I finally made it to Shippensburg University, but it wasn’t for homecoming. I spoke in front of 235 men about the importance of regular self-exams and discussing their health openly. Following my speech, we all participated in a world record attempt for the largest simultaneous self-exam.

You don’t have to lead a simultaneous self-exam attempt to join this crusade. It’s simple—you just need to talk. Talk to a male buddy about your health. Ask him about his. Ask when he last did a testicular self-exam or scheduled a prostate exam.

Will talking about your health be uncomfortable? At first, probably. But eventually, we can change the dynamic and the stigma against men discussing health. Dialogue like this should be commonplace and encouraged. It may be the conversation that saves a life.

Let’s work together to spread light where the sun don’t shine.