Will This Chinese Guy’s Giant Balls Help You Survive The Apocalypse? 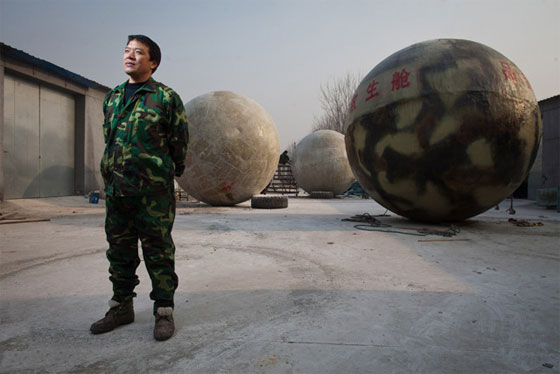 2012 was a big year for the end of the world, with the Mayan calendar coming to an end, and it saw a panoply of inventors coming up with concepts for a few humans to survive and repopulate the planet. With a new group of would-be prophets predicting a massive asteroid hitting the Earth in September of 2015, it might be time to revisit some of those ideas – in particular, a Chinese guy’s giant balls.

Lu Qiyuan is a farmer in Heibei province who took the story of Noah’s ark very seriously. Convinced that the end of the world would come in the form of tidal waves that washed away everything Man has built, he endeavored to create a dwelling that would allow us to preserve our best and brightest. And, naturally, he thought of balls.

Qiyuan’s “survival pods” are spherical steel frames covered with fiberglass and heavily insulated to withstand extreme temperatures. He claims that they could keep a person alive for up to four months at the North Pole and float happily on waves a thousand feet high without capsizing. He based the general design on the humble Ping-Pong ball, which may have a thin outer shell but can withstand enormous impacts without deforming. An electric motor in the sphere’s base allows it to

Passengers inside the spheres are secured with seatbelts and have access to a food supply. The ideal cargo is 14 people, but Qiyuan says that up to 30 can ride safely. Each pod costs a steep $48,000 to make, but when put against the future of humanity, that seems like it’s almost a bargain. Unfortunately for the inventor, he hasn’t managed to sell a single one of them, and heavily mortgaged his farm to get the capital to construct them.

What do you think? Would you shell out the cash for one of Lu Qiyuan’s survival pods, or do you welcome the apocalypse with open arms?