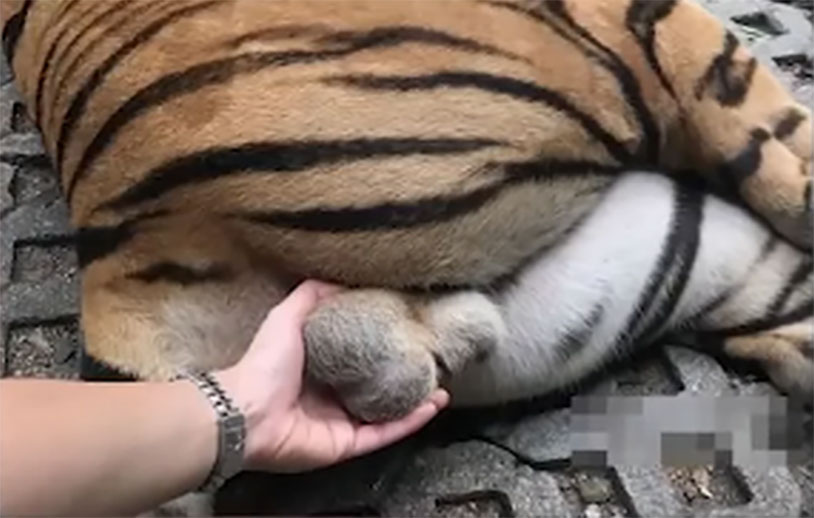 Tigers are certainly having their moment in the public eye in 2020, but it seems like Tiger King was a lifetime ago. For this story, we travel to a Thai tourist spot called Tiger Kingdom Mae Rim in Chiang Mai. This is one of many roadside animal zoos that keep these majestic cats in captivity to squeeze admission costs out of travelers.

In a photo posted on social media, a woman depicted herself grabbing and squeezing the gonads of one of these tigers. Her caption read “Pray in your heart and squeeze hard then you will be free from suffering.” General suspicion is that the animal was drugged at the time, because this is the kind of behavior that would typically cause someone to lose an arm. Thai authorities have not commented on the situation at Tiger Kingdom Mae Rim, but globally animal rights activists are up in arms.

A pervert female tourist cradles the testicles of a six-year old male tiger at Tiger Kingdom Mae Rim in Chiang Mai. She posted this on social media with a caption that implied she had squeezed them. DO YOU KNOW HER?#AnimalAbuse #idiots #tigers pic.twitter.com/MprC2d9MLZ

There’s simply no excuse to pen up one of these animals in conditions like this. Constant interaction with humans is not beneficial to them, and we’d be extremely pissed off if strangers kept coming into our house and fondling our sack.