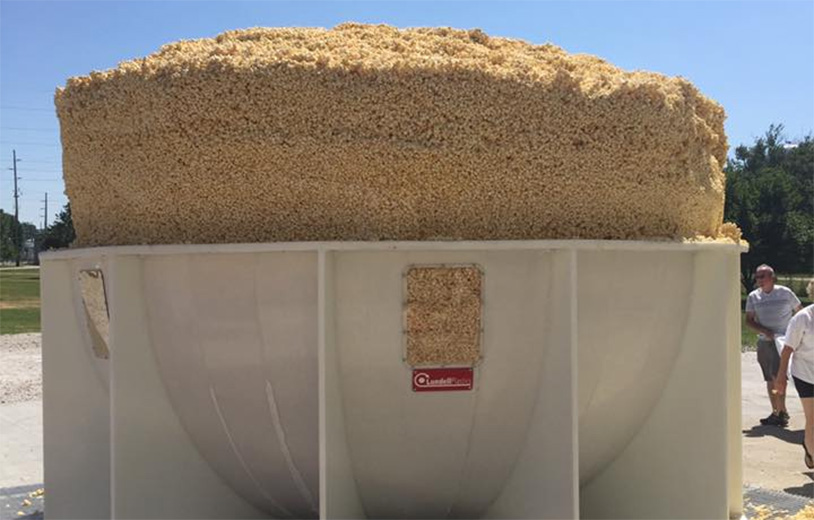 For over two decades, Sac City, Iowa’s claim to fame was that it was the home of the world’s largest popcorn ball, a massive sphere of delicious sweet corn that started at 2,225 pounds and just kept growing. Unfortunately for Sac City, the Indiana State Fair wrested that achievement away in 2013 by building a 5,500 pound popcorn ball.

This past weekend, Sac City took their title back. Residents from all over banded together in an effort to construct a popcorn ball so big that the record could stand for another 20 years, with a target weight of a staggering 10,000 pounds. They worked nonstop throughout the weekend, pouring a mixture of fresh-popped corn and sugar, plus water and a dry syrup mix to bind it together.

Using a massive spherical mold cast by a local plastics company, the first load went in at 3:30 on Saturday morning, and crews tirelessly popped and poured throughout the day. By Sunday, they realized that the record had been smashed and a 10,000 pound popcorn ball was within their grasp.

Here’s a video from a local news affiliate documenting the early hours of the ball’s construction. The next steps are to carve the top into a more pleasing shape and then release it from the mold.

The new record-setting popcorn ball will be displayed in a custom-constructed building, once again the most famous tourist attraction in Sac City. Good job, people.