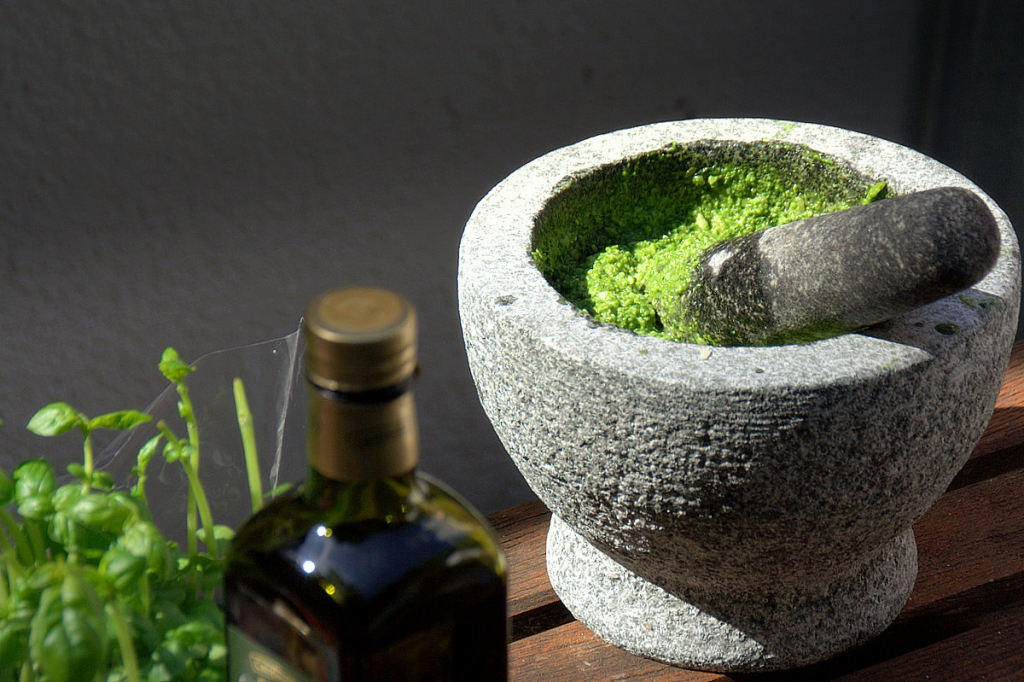 Jonathan C. Slaght, a biologist and the projects manager for the Russia program of the Wildlife Conservation Society, wrote in a New York Times Op-ed yesterday,

At this time of year, kitchens across North America are filled with the aroma of freshly picked basil, fistfuls of peeled garlic bulbs, hunks of Parmesan, cruets of olive oil and jars of pine nuts. It’s pesto season.

Mixing these ingredients into a delicious sauce for use throughout the winter months is an end-of-summer tradition. The tiny, delectable pine nut is often viewed as essential to a classic pesto “alla Genovese,” but it is the most vexing ingredient — for the high cost of even a small packet or jar of them.

Yeah, that sounds more like it. Making pasta sauce from scratch, using “cruets” of anything, is a hallmark of too much time and too much money. The Barefoot Contessa may be out gathering basil and garlic from her garden, but the rest of us are inside watching the last Star Wars trailer.

As it turns out, checking out lightsabers and X-Wings was the most responsible choice we could make, given what we know about the ecology of southern Russia and the provenance of our precious pine nuts. As Slaght reports, areas with large stores of the Korean pine tree are also rife with rare and endangered species which means, as you might expect, that the culinary tradition of early Autumn pestoing is having a outsized negative impact on the world at large.

The importance of the Korean pine to this rich ecosystem cannot be overstated. Innumerable animals from chipmunks and Asiatic black bears to nutcrackers and crossbills all depend on the nuts produced by this tree to survive the long winter of the southern Russian far east. Wild boars crunch open the calorie-rich cones with their powerful jaws; red deer nibble at the fallen nuts. And shaded by the trees’ broad trunks, tigers stalk their prey.

The remedy? Go domestic with pine nuts sourced from America, where we have already killed all the cool animals, or skip the pine nuts altogether. You’ve had fettucine alfredo, right?